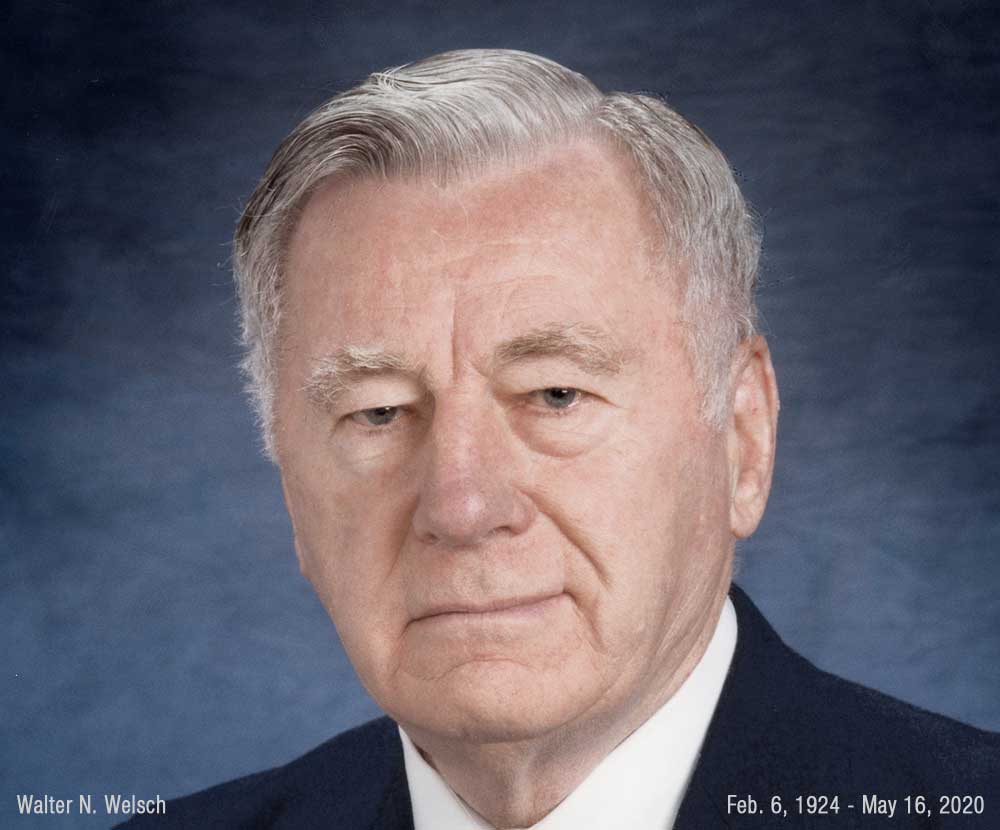 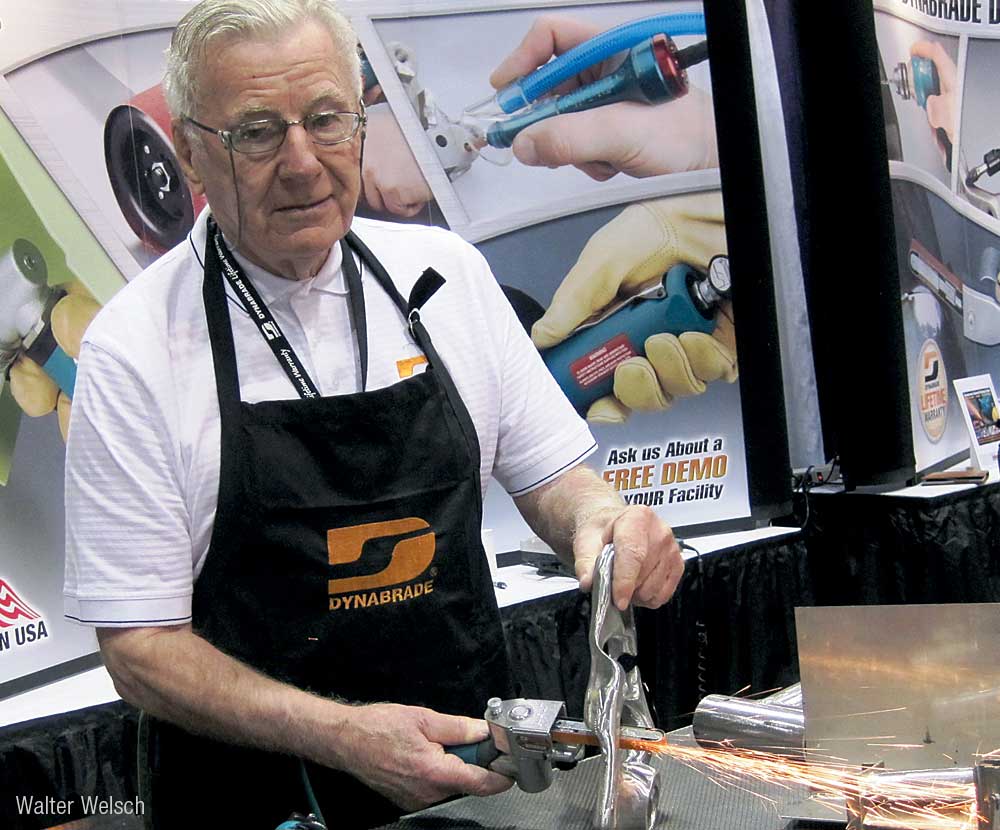 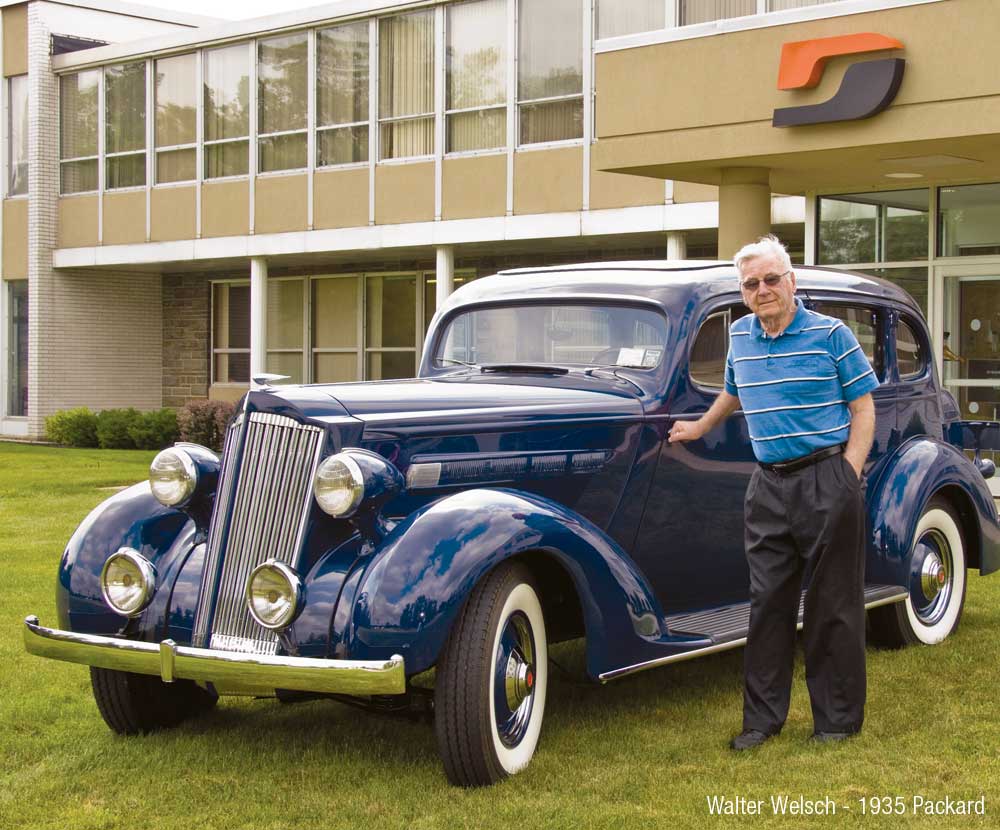 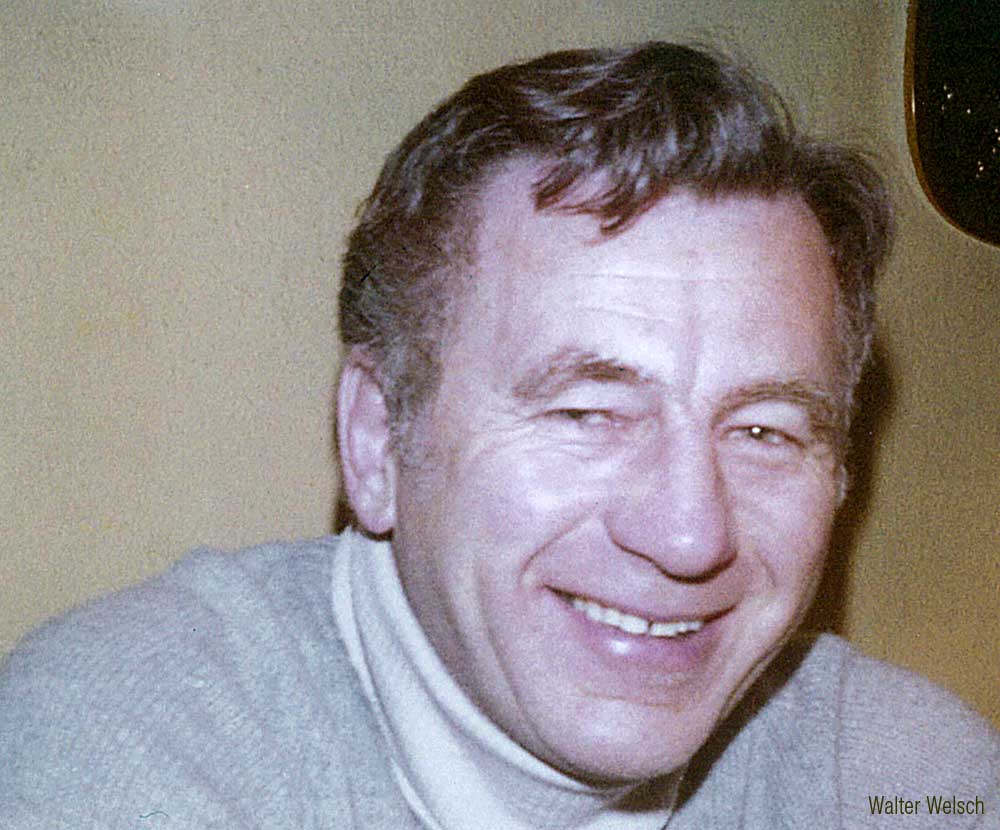 History of how Dynabrade began by Walter Welsch.
I started working for the 3M Company in 1951, selling coated abrasives. My first sales territory was in Buffalo/Rochester, New York. At that time Curtis Wright was in Buffalo and was one of the first companies to manufacture jet engine blades. This led to my being one of the first people ever to see abrasive belts being run over small one inch diameter contact wheels, grinding convex areas on high alloy metals. Until then, splices on abrasive belts could not do that.

Idea For The Dynafile® 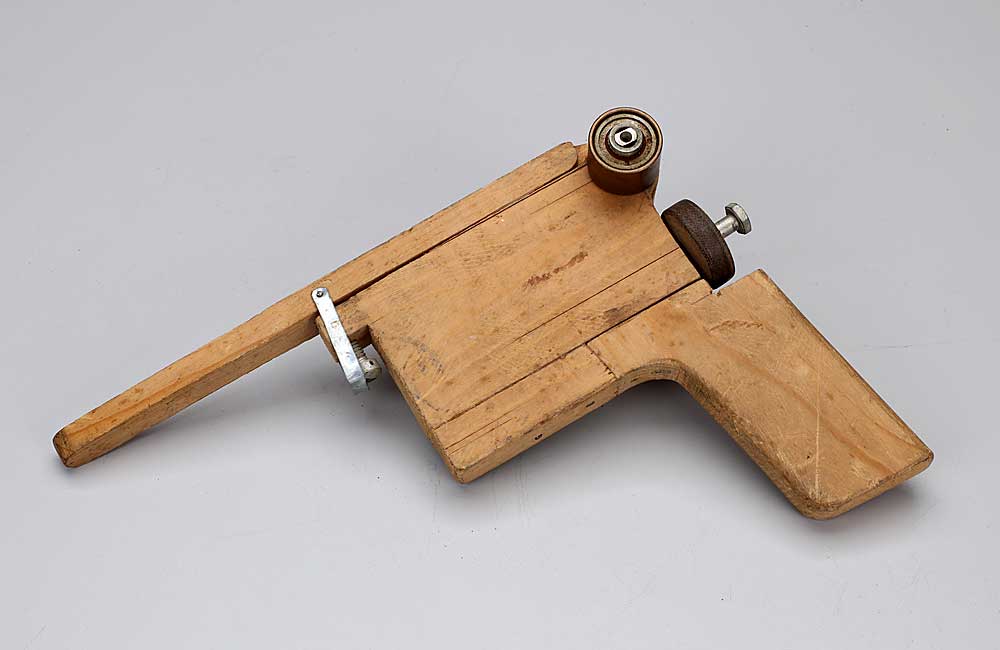 Wurlitzer, the world famous jukebox manufacturer, was also one of my accounts. While visiting Wurlitzer, I saw a lady filing square holes in an aluminum casting that was used as a jukebox grill. The idea occurred to me that a portable abrasive belt running over a 5/8" diameter contact wheel could file those holes much faster. That moment was the beginning of the Dynafile® and the true start of Dynabrade, Inc. 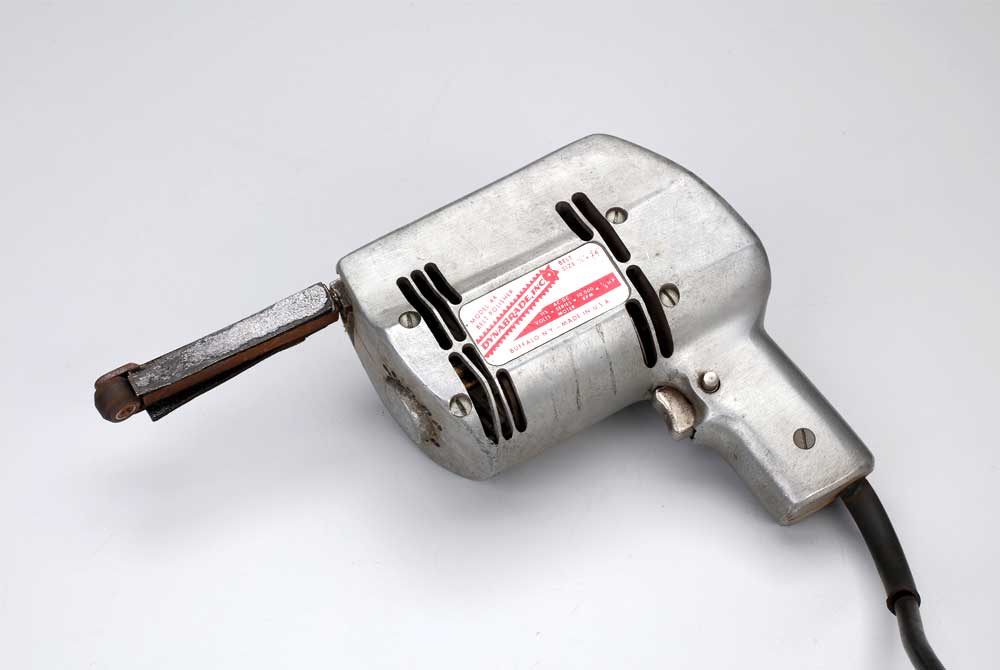 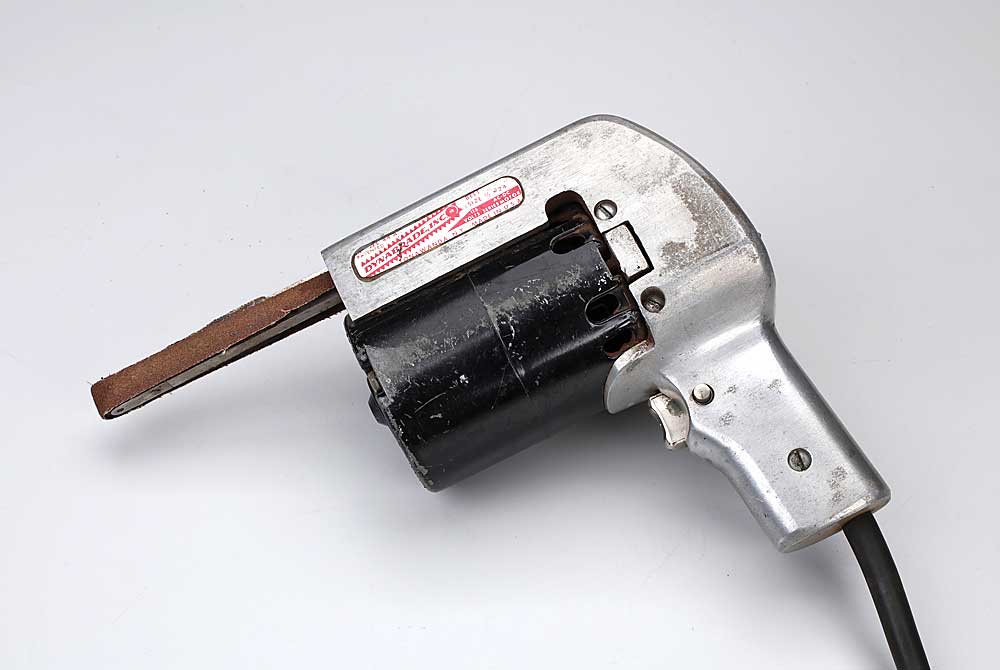 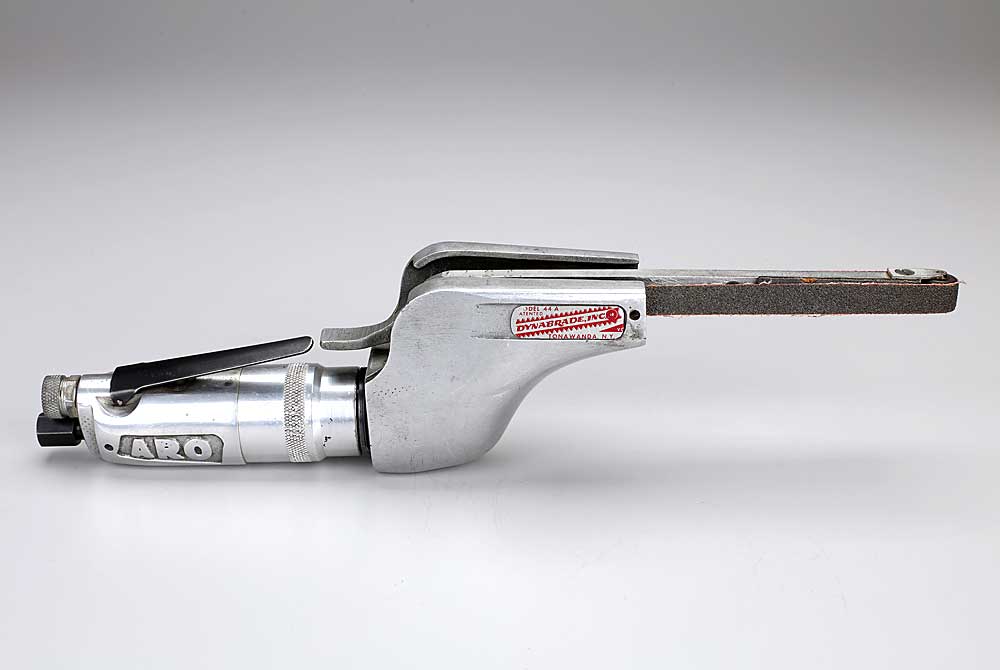 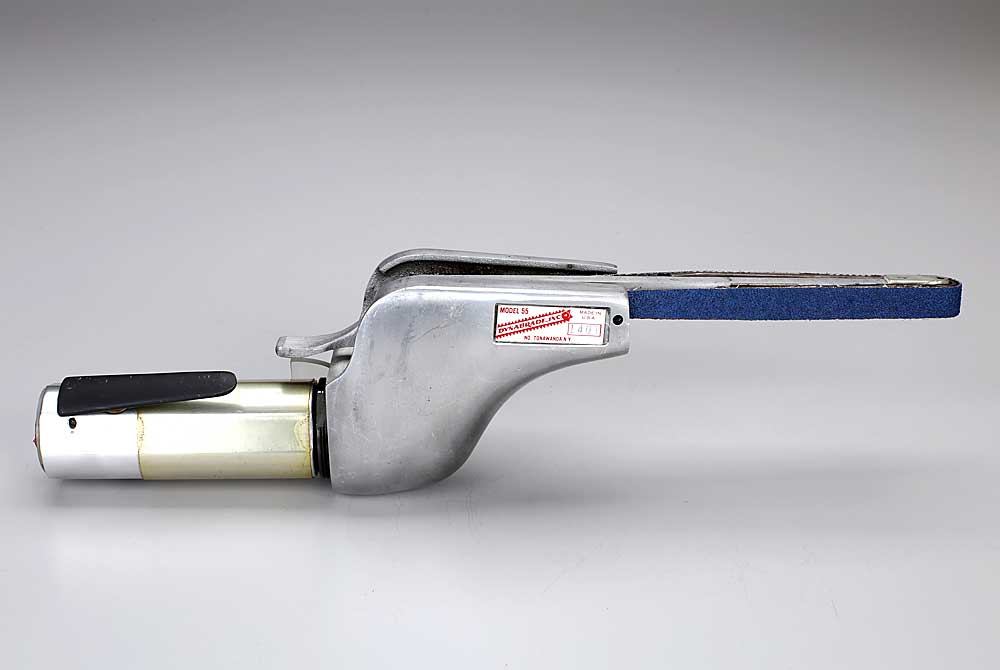 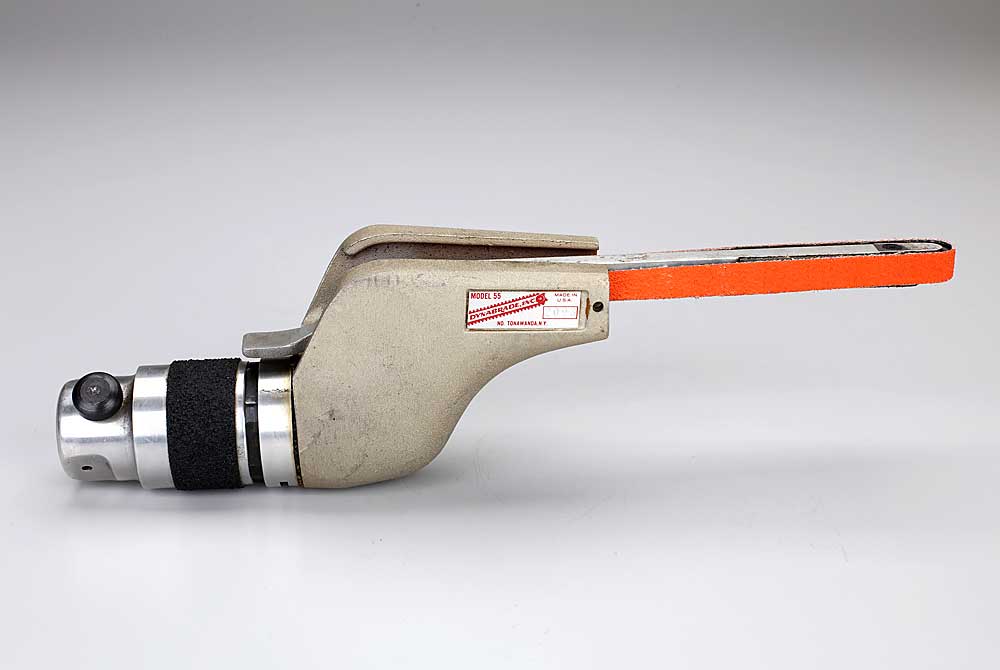 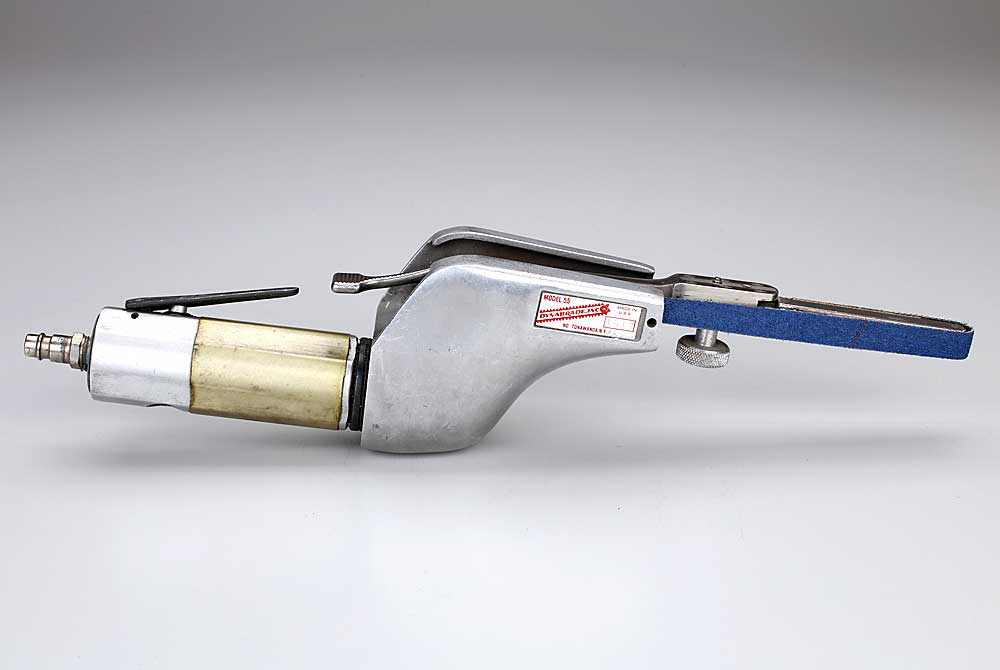 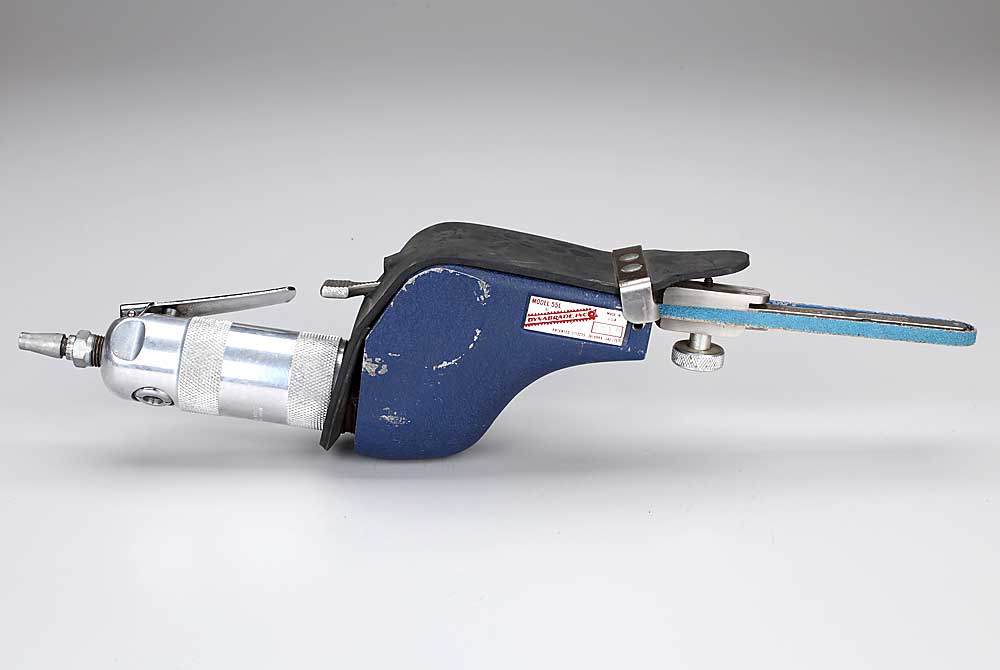 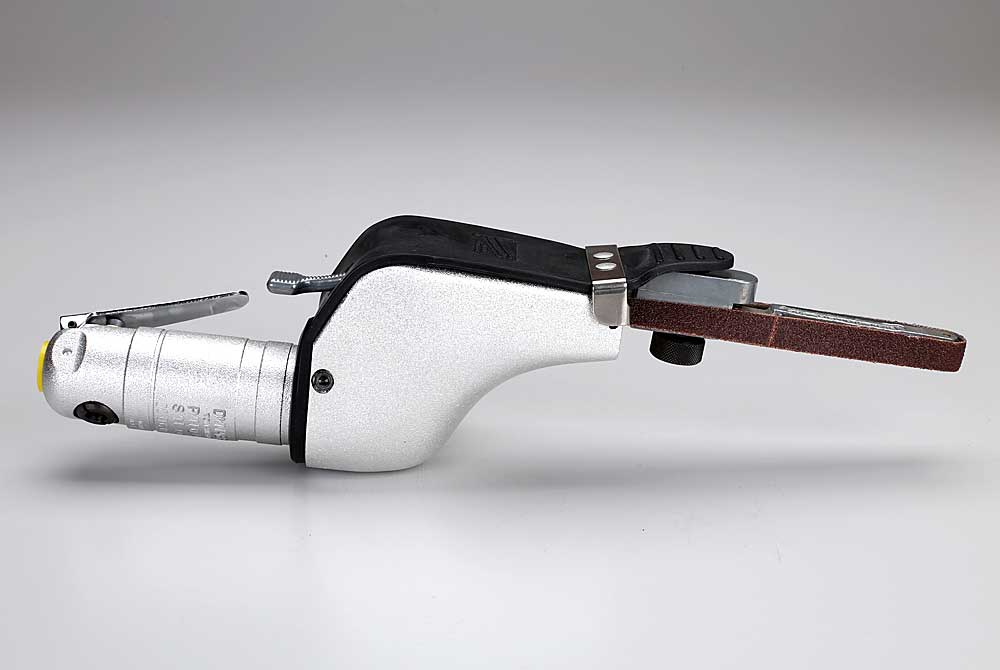 With Fred Hopke, the Timesavers salesman, we called on Atcheson Graphite and met with Dick Redman, a graduate mechanical engineer. Later, Dick and I talked about my portable belt tool idea. He designed an electric motor and aluminum tool housing, while I designed the belt tracking system. We then went to Al Buetner, a small machine shop owner, and tried to get it all machined. Somehow, this took three years. The project was forgotten until 1968, when I went at it again and got a working model. I had accumulated $14,500 in 3M stock, and M&T Bank agreed to lend me $14,000 if I used the stock as collateral. Redman had suggested that he would come into the business venture, but he quit his job and moved to Bangor, Maine – and out of my life. I showed the tool prototype to 3M and they were excited about it. I worked at 3M until March 31, so April 1, 1969 was the official start of Dynabrade, Inc. I needed someone to assemble the tool and got Jack Fahey, a Burroughs machine repairman, to come in evenings after his day job. He did this for a full year with no pay. 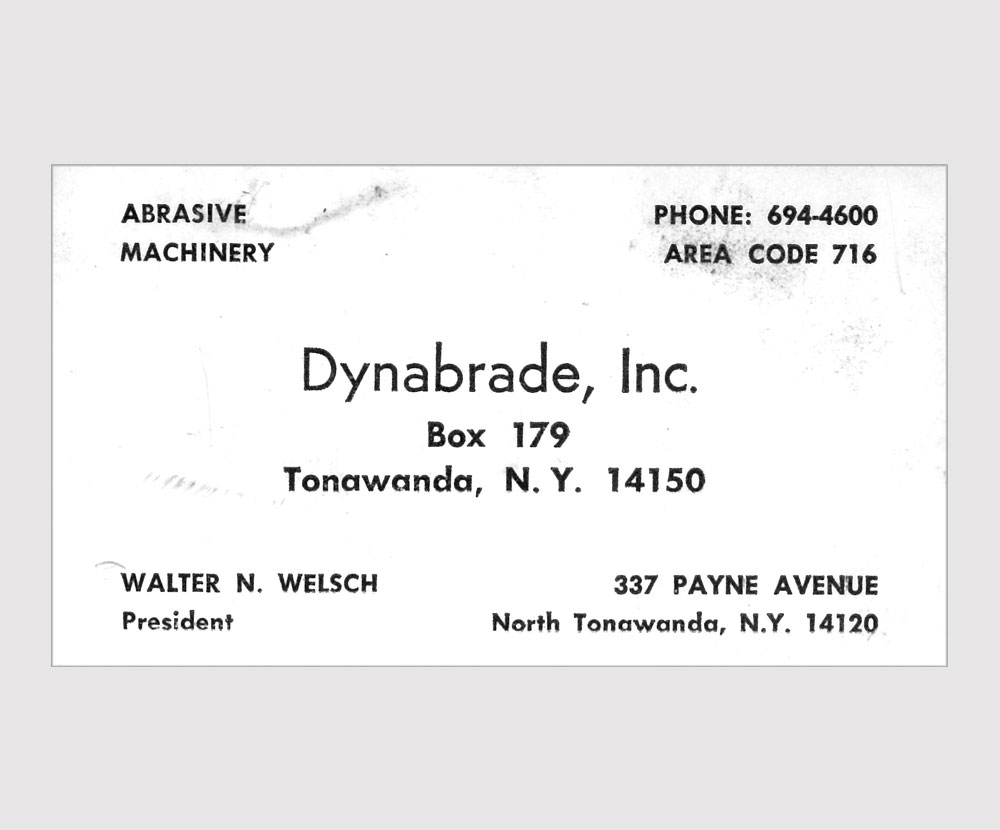 By April 15, I found that the motors were giving electric shocks and were dangerous to use. So I discontinued the tool. Then, I dreamed up an air-powered tool. Art Boss, an Aro sales representative, suggested we go to Aro in Ohio, where they would help me. They did! I came home and immediately went to the pattern shop to buy patterns for the new castings. The pattern shop owner said he'd need pattern drawings. I told him that I had none and couldn't make them. He gave me a piece of clay and told me to mold one with my fingers, which I did. He said that I would have to be there every day at noon to work with his pattern maker and the pattern would be done in two weeks. I then went to the foundry and gave them an order to make three castings. After the castings were made. I went to a machine shop and gave them an order to machine the castings in two weeks and three days. They did, and I demonstrated and sold tools at a 3M show in Detroit on July 15, 1969. Today, 50 years later, that casting is still almost identical. I bought 100 motors from Aro and we were in business. Within three months, the 3M belts were breaking at the splice. Don Scholten, my former boss at 3M, suggested that 3M might stop selling me belts. Then I remembered that Hermes, an abrasive manufacturer in Germany, made great belts. I bought 200 from Hermes and they worked just perfectly. I sent 50 Hermes belts to 3M and asked Connie Freeks, head of their laboratory, to duplicate these belts and he did. Then Aro , the air motor manufacturer, went on strike and suddenly, I couldn't get air motors. I contacted Dotco and bought their air motors for $45 each, while Aro had been charging me $80 each. I saved on my cost per motor and the Dotco motors were smaller and lighter in weight. 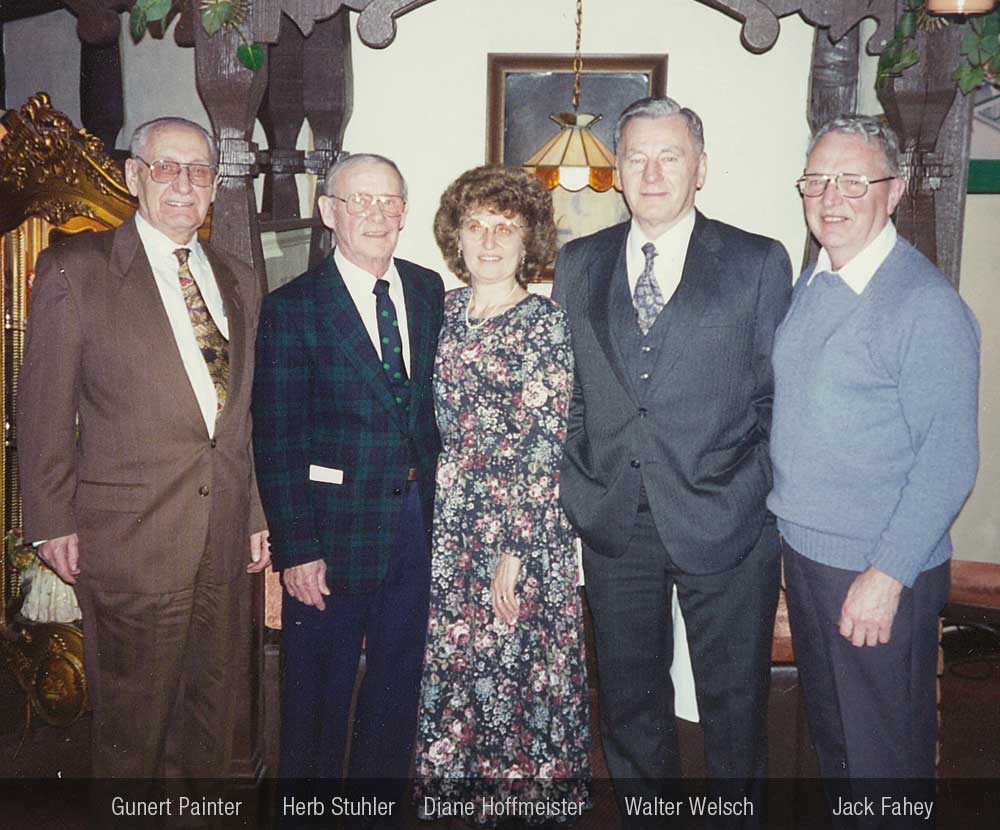 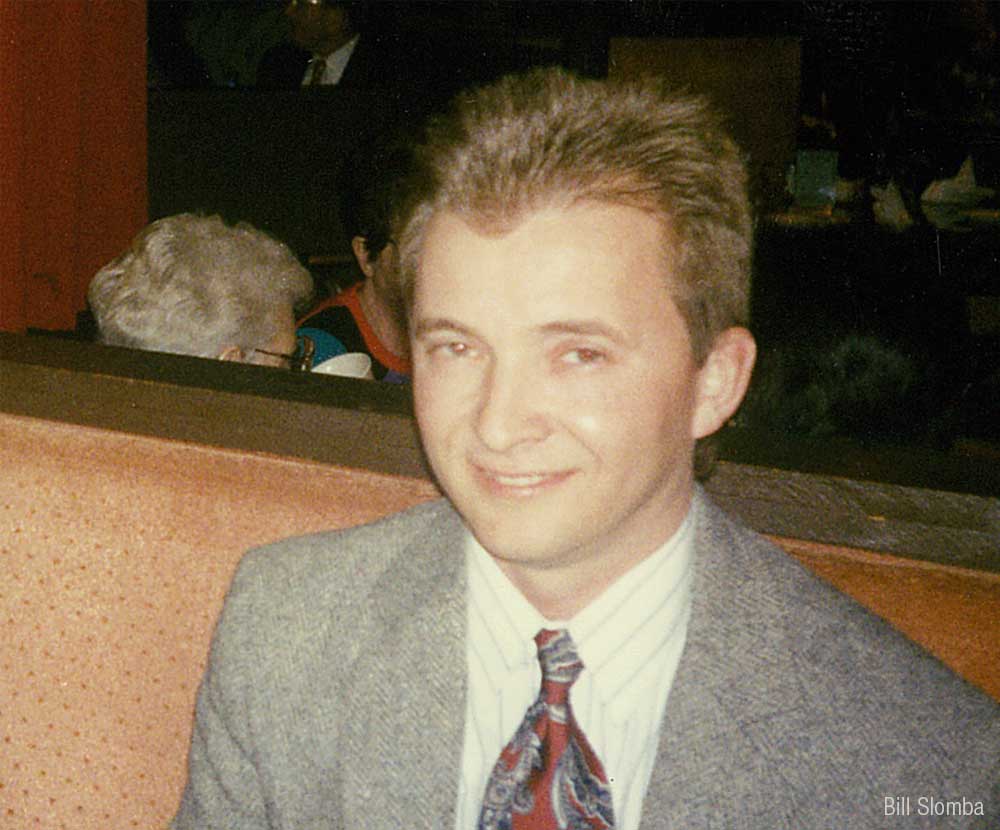 Dynabrade sold $100,000 in products that first year. After that year, Jack Fahey quit his job at Burroughs and came aboard full time. I took no pay that first year, living on funds from 3M that were meant to be a pension. Both Jack and I then went on salary. Soon Jack hired Bill Slomba, a 16 year-old student from the BOCES school, to help in our shop. Then Eileen Fuller was hired as a part-time bookkeeper, for $2.50 an hour. And finally Diane Hoffmeister was hired, the fastest typist in the world. 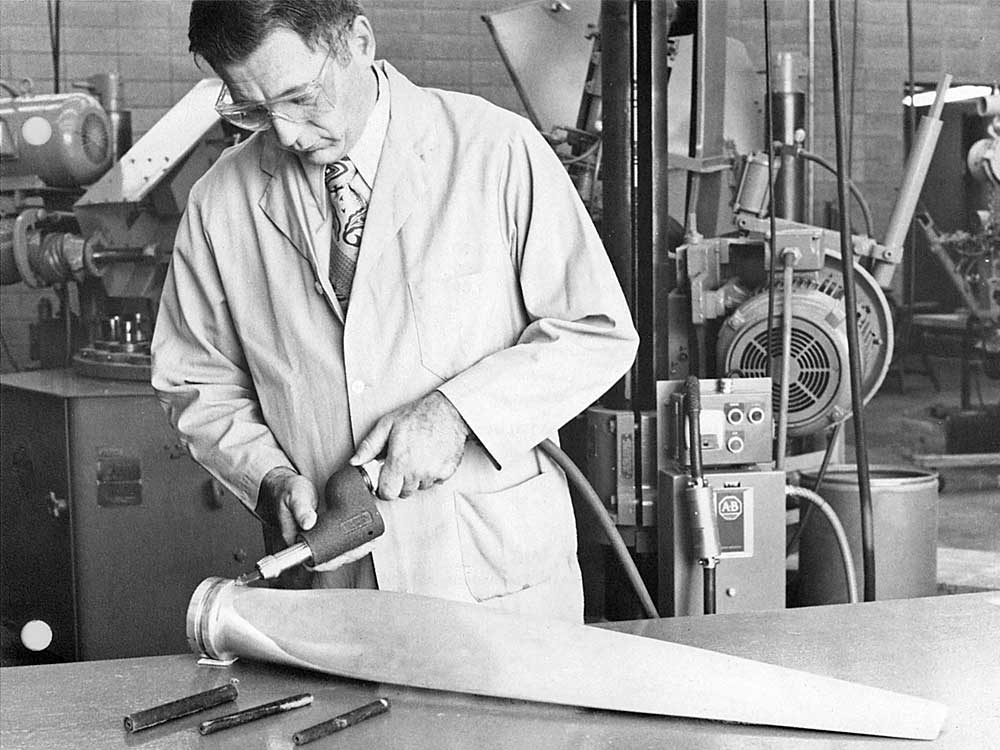 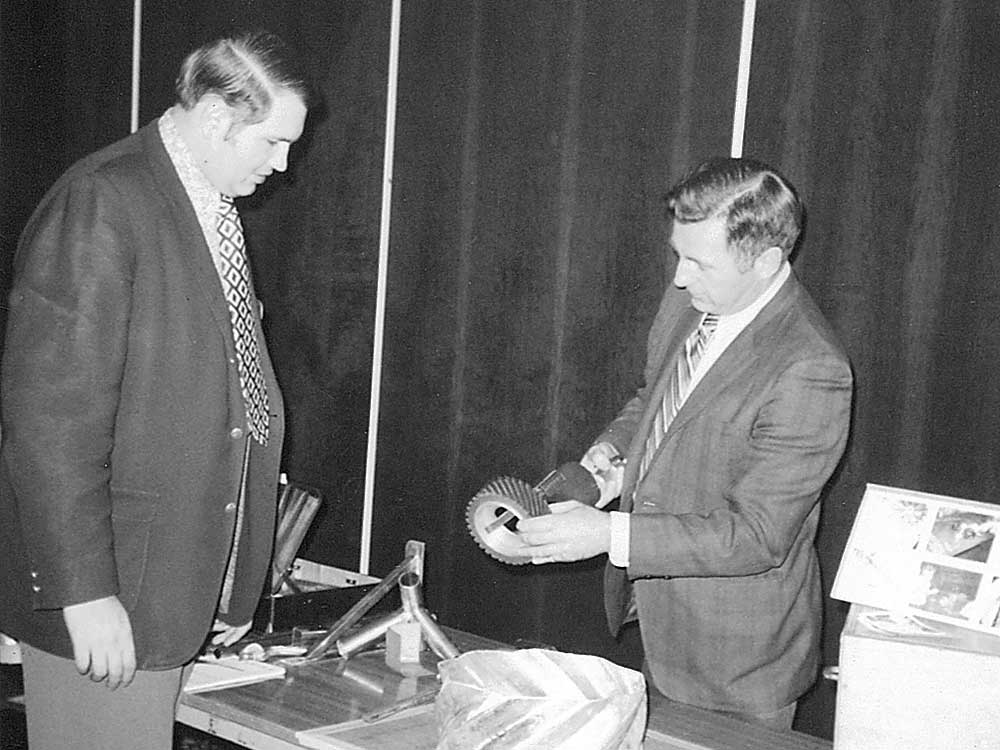 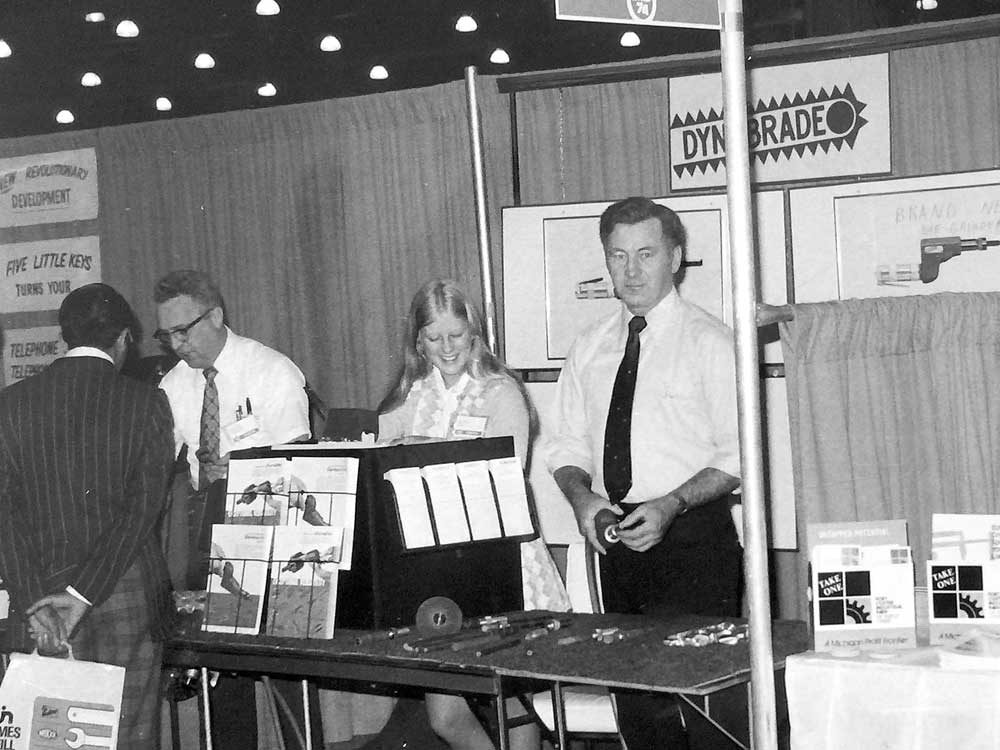 In 1972, 3M started a clinic on small tools that began in Seattle and worked down to San Diego, then over to Florida, up to Boston and finally to Omaha. I demonstrated the Dynafile® in 41 cities in five months. I set up distributors in every city along the way, and that was the real start of Dynabrade. In 1974 Ed Karl of 3M set me up with visits to Belgium, Germany, Zurich, Rome, Paris and London. While exhibiting at the Hannover Fair in Germany, the adjustment screw in the Dynafile® stripped its threads and I was out of business at the biggest industrial show in the world. A new friend, Waldemar Loeser, repaired the screw for me, and then bought 50 Dynafiles®. I worked the Hannover Fair in Germany for 11 straight years, then sent Craig Locke to London, where he started Dynabrade Europe. In 1989, the operation was moved to Luxembourg, and in 1998 a new building was constructed there. And the rest, as they say, is history.